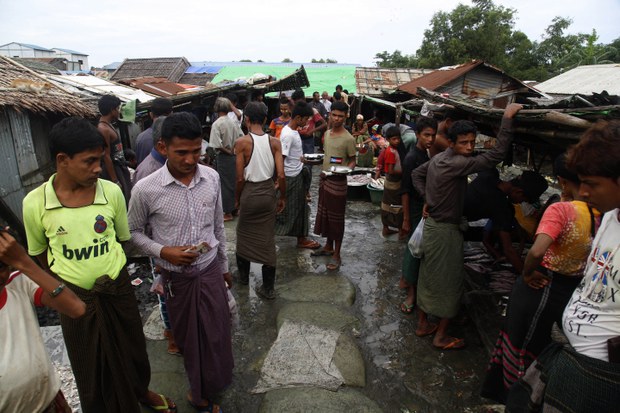 Bangladeshi government officials this week had their first meeting with Burmese junta representatives on the issue of repatriating Rohingya refugees who are sheltering in Bangladesh.

The repatriation talks, the first in more than a year, have been moving at a snail’s pace since more than 700,000 of Myanmar’s stateless Rohingya ethnic minority fled to southeastern Bangladesh in August 2017 after a brutal military offensive against them in Rakhine, their home state.

Bangladesh noted that it was dismayed at Myanmar’s tardiness in the vetting and verifying of Rohingya refugees, a statement issued Friday by Dhaka’s foreign ministry said about the meeting a day earlier. The verifying of refugees by Myanmar is a prerequisite for their return.

“The first-ever meeting of the newly formed technical level Ad-Hoc Task Force for Verification of the Displaced Persons from Rakhine was held today virtually between Bangladesh and Myanmar,” the statement said.

Shah Rizwan Hayat, Bangladesh’s commissioner for refugee relief and repatriation, “expressed dismay over the slow pace of verification of past residency by Myanmar and offered all cooperation … to expeditiously complete the verification process,” the statement added.

Hayat noted that filling in the gaps in pending verification would pave the way for a quick “sustainable repatriation” of the people uprooted from Rakhine. He said the creation of a conducive environment there and confidence building among Rohingya would also facilitate swifter repatriation.

Two earlier attempts to begin repatriation to Myanmar – in November 2018 and August 2019 – failed, with Rohingya leaders saying at the time that refugees would not return until their safety, security and rights were guaranteed in that country.

The two nations had resumed China-brokered talks last January after a pandemic-related lull, and they tentatively discussed a fresh attempt to begin repatriation in the second quarter of 2021. The next month, though, the Burmese military toppled the elected government and that delayed further discussions yet again.

At Thursday’s discussion, “both sides expressed readiness to continue working closely to address the reasons causing delay in the verification of the past residency of the displaced people in Rakhine,” Bangladesh’s statement said.

However, an ex-diplomat and some of the Rohingya in the sprawling refugee camps in Cox’s Bazar district near the Myanmar border are not optimistic that Naypyidaw will easily agree to repatriation. Both said there must be pressure from Bangladesh as well as internationally on Myanmar to take back the refugees.

“[Myanmar] will only agree to accept the Rohingya when Bangladesh builds up pressure which they can’t overcome,” he said.

One refugee leader, Mohammad Alam, said he and many others want to go back home one day, provided it is safe to do so, but that is not likely to happen soon.

“But we believe Bangladesh and the international community have been working in favor of the Rohingya. We will definitely return to our homeland someday.”

Meetings are essential to keep the momentum going, said Kin Maung, founder of the Rohingya Youth Association in Cox’s Bazar.

“There must be a way out if the meetings continue,” Kin told BenarNews.

“But the international pressure on Myanmar must continue, otherwise they would change their position.”

Separately, Japan on Friday announced an infusion of U.S. $2 million in aid for Rohingya refugees who have been moved from the camps in mainland Bangladesh to a remote Bay of Bengal island.

“This contribution includes U.S. $1 million to the United Nations High Commissioner for Refugees (UNHCR) and U.S. $1 million to the World Food Program (WFP) and allows implementing humanitarian assistance activities for the displaced Rohingya who are in need of urgent assistance in Bhashan Char in areas such as food and health,” said a statement from the Japanese Embassy in Dhaka.

With Rohingya repatriation delayed seemingly interminably, the Bangladesh government has moved around 20,000 Rohingya to Bhashan Char Island to ease the situation in the crowded camps in mainland Cox’s Bazar.

Critics have said the island is unsafe during the monsoon season and also lacks the requisite infrastructure to support thousands of people. In October, UNHCR signed a deal with the Bangladesh government to begin humanitarian work on Bhashan Char.

Japan’s envoy in Dhaka, ITO Naoki, said he hoped the Japanese contribution would help with the necessities needed on Bhashan Char so refugees can live there safely and comfortably.

“Japan expects the U.N. will respond to prevailing and increasing humanitarian and protection needs on the island, and strongly hopes that this assistance will contribute to better service delivery and improve living conditions of people living on Bhashan Char,” Naoki said in a statement.

May 25, 2022
Lakers have no intention of giving up first-round pick to trade Russell Westbrook, per report

Lakers have no intention of giving up first-round pick to trade Russell Westbrook, per report

May 25, 2022
Bulls’ Zach LaVine undergoes arthroscopic surgery on left knee after battling through injury during season

May 25, 2022
Lakers have no intention of giving up first-round pick to trade Russell Westbrook, per report

Lakers have no intention of giving up first-round pick to trade Russell Westbrook, per report

May 25, 2022
Bulls’ Zach LaVine undergoes arthroscopic surgery on left knee after battling through injury during season